Gold remains confined in a narrow trading range, around the $1950 region.
The price action now seemed to constitute the formation of a bearish triangle.
Sustained weakness below $1900 is needed to confirm the negative outlook.

Gold extended its sideways/directionless price action through the early North American session and remained confined in a range, around the $1948-50 confluence region. The mentioned area comprises of 200-hour SMA and the 38.2% Fibonacci level of the $2075-$1863 corrective fall.

The commodity has been attracting some dip-buying ahead of the $1900 mark over the past one month or so. However, any attempted positive move has been capped near a resistance marked by a near one-month-old downward sloping trend-line. The combination of horizontal support and trend-line resistance constitute the formation of a descending triangle on short-term charts.

The descending triangle is a bearish formation that usually forms during a downtrend as a continuation pattern, supporting prospects for the resumption of the recent corrective slide from record highs. That said, neutral technical indicators on hourly/daily charts haven't been supportive of any firm direction and thus, warrant some caution before placing fresh directional bets.

Bearish traders are likely to wait for a convincing break through the $1910-05 horizontal support, below which the commodity is likely to slide back towards the August monthly swing lows, around the $1863 region. Conversely, a sustained strength beyond the $1970 level (50% Fibo. level and descending trend-line) will be seen as a fresh trigger for bullish traders.

The yellow metal might then aim to reclaim the key $2000 psychological mark and climb further towards the $2016-17 resistance zone. Some follow-through buying will set the stage for a move back towards record highs, around the $2075 region, set on August 7. 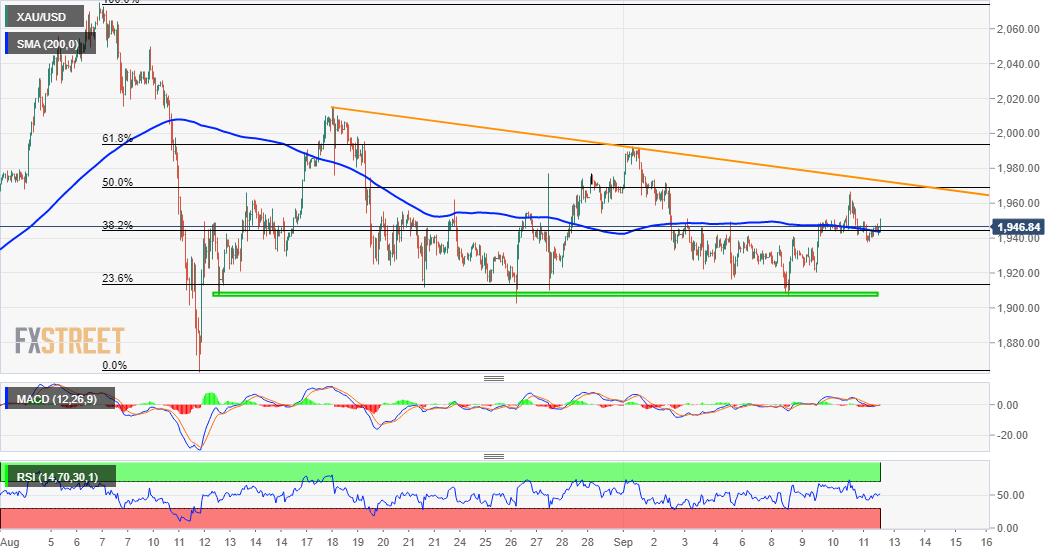 Information on these pages contains forward-looking statements that involve risks and uncertainties. Markets and instruments profiled on this page are for informational purposes only and should not in any way come across as a recommendation to buy or sell in these assets. You should do your own thorough research before making any investment decisions. FXStreet does not in any way guarantee that this information is free from mistakes, errors, or material misstatements. It also does not guarantee that this information is of a timely nature. Investing in Open Markets involves a great deal of risk, including the loss of all or a portion of your investment, as well as emotional distress. All risks, losses and costs associated with investing, including total loss of principal, are your responsibility. The views and opinions expressed in this article are those of the authors and do not necessarily reflect the official policy or position of FXStreet nor its advertisers.